Just after McDonald’s and other fast food chains were criticized in a published study regarding their terrible kids’ meal options, Cindy Good, McDonald’s nutritionist came fighting back.

In an interview with The Salt Lake Tribune, she insisted that McDonald’s fares for kids are healthy. She even said that she has been eating it regularly and nothing’s been wrong with her health.

Goody stated in the interview that McDonald’s has been “listening to moms in particular” and “recognizing that people are becoming more mindful about what they’re putting in their mouth.”

There’s something odd in her statement since there’s no point in a fast food restaurant in trying to create healthier menus unless their customers have started noticing that their menu options are unhealthy. 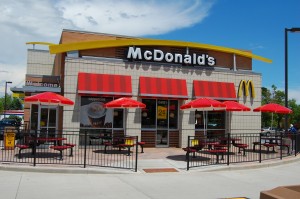 “We’re making nutrition mainstream at McDonald’s today,” Goody said in the interview. She explained that McDonald’s has added a new Happy Meal with apples, chicken sandwiches with buns that contain 8 grams of whole grains, oatmeal dishes and smaller portion of fries. The Chocolate milk they serve is now fat-free, compared to the one per cent they contain before, she explained.

Goody claims that McDonald’s food is part of her own healthy diet. ”I’m a mom of a 2-year old and I gained the prerequisite 30 pounds and I was able to lose all that baby weight,” she says.

“I don’t have a fast metabolism and I eat an Egg McMuffin and apples. My new thing is to have a hamburger or a double hamburger, no chees, two bags of apple slices and an oatmeal cookie and still keeping it under 600 calories,” she adds.

The Tribune interview was part of McDonald’s strategy of promoting its new McWrap line. Advertising Age earlier this week has come out with a piece about a McDonald’s internal memo that described the McWrap as a “Subway buster”.

The chain hopes to lure away a big number of millennial customers from its rival Subway. The calorie content of the wraps ranges from 360 to 600 calories, depending on whether the customer orders deep-fried or grilled chicken.

There are eight children’s meal offerings at Subway. Based on the findings of the Center for Science in the Public Interest, they are all exceptions to the standard fast food meals for children. All of Subway’s kids’ meals passed the nutrition criteria of the center.

One thing that Cindy Goody did not consider is the children’s overall health. It is possible to eat fast food every single day and still maintain a healthy weight. The question is: will it really make a person, especially a kid, healthy?

If people are not still aware of it, they should know that fast foods taste yummy because they are laden with too much sugar, sodium, and everything that designers of fast food meals add so that they will really taste good.

We are not even taking into account the chemical food preservatives that are ingested in most of the ingredients to make them last longer than usual. This is to keep their revenues on top of the red line.

Another thing that is set aside in this issue is that restricting the calorie content of a meal is not the only factor that makes a food item healthy. A person who loses 30 pounds in a short time does not mean he is already in good condition.

Unless the person is eating healthy foodstuff with all the micronutrients that his body needs, he has not made any progress in his quest for good health. It is entirely possible for a person to be thinner than he once was, while eating a terrible diet.

Therefore, it is really something to hear a person boasting of getting healthy from eating fast foods every day, which are known to be unhealthy and bought from a fast food chain that serves sandwiches that contain 83% of a person’s maximum daily intake, and milkshakes with 54 additional ingredients.

Eating at fast foods is more convenient. There is no need to wash, cut and cook food ingredients. All a person needs to do is to go to a fast food restaurant, choose the meal that he can afford and wait for a few minutes, and start eating.

Cooking is really time-consuming and sometimes frustrating. When there are several kids in the family, the situation gets worse. Fast food chains are really good alternatives to stressed out moms and dads.

Hopefully, the present trend of fast food chains offering healthier kids’ meals is a good start in the right direction. But consumers must be careful not to be persuaded with statements coming from people who have vested interests.

They should really make sure that the meals their kids are eating at fast food chains contain the nutritional elements that will make them healthy.