Last August 25, 2014, Dunkin’ Donuts, one of the biggest, one-stop shop chain restaurants for coffee and pastry goods in the United States, has jumpstarted the fall season with its offer of new and all-time pumpkin beverages, donuts and muffins; once again proving their status as a leader in the hot/cold beverage and baked goods market category.

Dunkin’ Donuts’ Vice President of Culinary Innovation and Executive Chef Jeff Miller said he is “truly amazed, that every year, guests show enormous amount of anticipation and excitement for the return of pumpkin beverages and baked goods once summer months come to a close.” With the inspiration to start the fall season early, it is clear that Dunlin’ Donuts customers will have a lot to look forward to as the restaurant chain continues to innovate their products and service to not only attract more customers but maintain their relationship with existing guests.

Front lining their autumn season offerings are the all-new Pumpkin Latte and Pumpkin Crème Brulee Coffee, both a delightful blend of creamy vanilla and pumpkin flavors which you can have either iced or hot. Not to be outdone is the full line up of Dunkin’ Donuts’ classic baked goods and beverage fall favorites, allowing the restaurant chain to offer a huge variety of pumpkin beverages and pastries to its clientele. You need to hurry though, as all pumpkin beverages and baked goods are only available for a limited time by the 1st of September in all Dunkin’ Donuts stores. 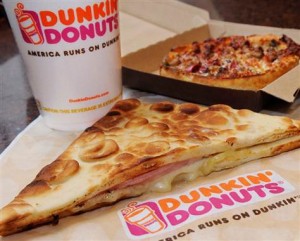 So aside from the Pumpkin Lattes and the Pumpkin Crème Brulee Coffee, what other pumpkin favorites can you choose from? Dunkin Donuts offers an array of all-day customer favorites including Pumpkin Muffins topped with streusel crumbs and white icing; Pumpkin Donut and MUNCHKINS Donut Hole Treats that are glazed pumpkin donuts and sweet, bite-sized donut hole treats; Pumpkin Pie Donuts which is an all-time fall season favorite with its butter crème filled, pumpkin pie flavored shell topped with white icing and graham crackers and Pumpkin Lattes and Coffees which blends the spices and unique flavors of autumn into Dunkin’ Donuts world famous coffees and iced beverages. Choose among Pumpkin Mocha or Pumpkin Flavor varieties and both are served iced or hot.

Valued clients can delight in the Autumn beverage and baked goods line up in all participating Dunkin’ Donuts stores until fall and continue to enjoy them until October as a new pumpkin treat is in the works. To stay updated with the latest news on Dunkin’ Donuts beverages and baked goods, you can follow them on their official Twitter and Facebook page where more news would be posted in the next few weeks.

Speaking of Twitter, Dunkin Donuts has brought its pumpkin menu closer to its customers via the micro blogging site with the exclusive “PumpeDD for Pumpkin” Twitter Sweepstakes that started August 25 until August 27 where customers will get a chance to win one of the seven $50 Dunkin’ Donuts mGifts by simply sharing which pumpkin menu offering they are so pumped up about with the hashtag #PumpkinAtDunkinSweeps. No purchase is required and participants need to be above 18 years old to qualify.

Something to Warm Up Your Fall

To keep the autumn chill at bay, Dunkin’ Donuts is also bringing back the Spicy Smoked Sausage Breakfast Sandwich, a tasty way to add a much needed spice this fall. This all-time favorite breakfast is a spicy combination of spicy sausage link with American cheese and an egg served on a freshly toasted English muffin. Joining the Pumpkin line up for the season as well as other breakfast must-tries such as aged cheddar cheese breakfast sandwich, cherry wood smoked bacon breakfast sandwich, fresh-baked croissants, classic toasted English muffins and bagels, the Spicy Smoked Sausage Breakfast Sandwich is available in participating Dunkin’ Donut stores.

Battle of the Pumpkin Lattes

But it’s not just Dunkin’ Donuts that announced an early offer of its Autumn product line up. Starbucks have also made their Pumpkin Spice Latte available to guests, quite unexpectedly, last August 25. The comeback was hinted via the Starbucks Pumpkin Spice Latte Twitter Account on August 8th, much to the delight of fans and the subsequent Twitter posts of Starbucks baristas holding up pumpkin spice syrup containers further fueled the imagination and anticipation of the public. While much speculation has been done as to whether or not Dunkin’ Donuts and Starbucks are indeed trying to outdo each other over marketing campaigns and brand offerings, it is clear that as far as the customers are concerned the two coffee giants’ efforts at starting the fall season early this year is very much appreciated. After all, what better way to welcome the fall season with a hot (or cold) cup of pumpkin latte?