A&W Restaurants reached their peak in terms of popularity in the 1960s and 1970s, with the locations numbering over 2,400 all over the United States. It’s hardly surprising then, that even with the advent of new restaurants, A&W continues to be a hit with baby boomers. But now the company is aiming not just for the baby boomers, but their children as well, and they’re using social media to entice them. 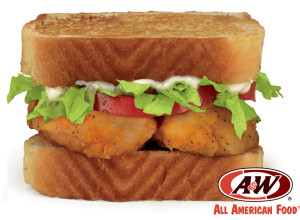 From 2,400 locations A&W today is down to about 700, but the company is determined to win young people over, and like other businesses today, they believe social media is the key. For instance, to promote the long named Hand-Breaded Chicken Tender Texas Toast Sandwich, the company is using an unwieldy hashtag (added spaces to make reading easier):

#super tasty large and in charge texas toast two handwich made with delicious one hundred percent white meat hand breaded chicken tenders and your choice of classic or spicy papa sauce either way you can’t go wrong wow that sounds good you need to try one its only available for a limited time Im going to have to go get one myself are you still reading this see you at A and W.

Not only does this go against the norm, but it goes beyond the character limitation Twitter uses. However, the logic behind it is that it only makes the product stick in the minds of people and promises something different.

But the brand’s campaign doesn’t start and end with social media however, as it has also launched a commercial that asks ““How would you describe the Hand-Breaded Chicken Tender Texas Toast Sandwich?”, with fast keyboard keys clicking the background as the speaker tries to say the entire hashtag.

According to A&W, theirs is the world’s longest hashtag, and that they will go to the Guinness Book of Records to verify this. So far, attempts to find a longer hashtag has failed, indicating that A&W may very well be the record holder.

The social media and advertising campaign is being managed by Cornett Integrated Marketing Solutions, the chain’s record agency, with has a base in Lexington, Ky. According to A&W records, the company spent less than $900,000 for advertising in 2013 but it should be noted that the ad expenses are not included as they are under separate management, that of the Dr. Pepper Snapple Group.

Looking for Growth and Rebuilding

Today A&W is ranked 168th among restaurant chains in the United States, according to an estimate made by Technomic, a restaurant marketing research and consulting firm. According to Darren Tristano, Technomic Executive Vice President, A&W is a brand “that is trying” to get back on track. While the name still has strong recall among many American baby boomers, it is still trying to find its mark among the younger generation. According to the latest figures, of the 700 A&W locations in the US, 200 are dine-in or standalone, 50 are drive-ins and the others are co-branded, where it shares space with other restaurants like Long John Silver’s and KFC.

What A&W is doing, Tristano says, is rebuilding and changing how baby boomer children look and perceive the brand. This sentiment is echoed by Tim Jones, one of the creative directors at Cornett, who says that the decades old brand is reinventing its approach to that of “hip nostalgia” similar to what Ray-Ban and Levi’s have done.

It’s clear that A&W is now using social media to attract the young crowd, a good example being the comments on their Twitter account are from the perspective of Rooty the Great Root Bear, the A&W mascot who was, in the company’s own words, “hibernating” for the better part of a decade. This approach is proving effective, and according to Liz Bazner, A&W digital communications manager, it allows them to be a bit more “silly and playful” and connect with young people.

It’s not just on Twitter that A&W is making its presence felt, as the brand also had a Rooty LinkedIn profile, and when you added Rooty to your network, he’d write funny recommendations, which proved to be a hit with several users. LinkedIn took out Rooty’s profile just a couple of weeks after the brand set it up, saying only real people can use the services on the site. A&W then posted a YouTube video showing mock indignation, and this also struck a positive chord among users.

In addition to Twitter and LinkedIn, A&W has also launched a mobile app that allows users to interact in different ways with Rooty the mascot, and it has also been positively received by many people. While all of these may seem like separate events and occurrences, the truth is they are not, and all part of the brand’s campaign to reinvent itself and capture the hearts and minds of the baby boomers’ children.

While there’s no doubt that having a great menu is necessary, brands must first entice people to try them. And these days, there’s no better way to do it than by using social media. As Forbes said back in 2012, if a business wants to get attention, they must use social media, as that’s pretty much where all their potential customers are. And from the looks of it, A&W is on the right track.