Arby’s Restaurant Group has recently embarked on a system wide and extensive remodeling program throughout the United States, and the undertaking affects all of their restaurants in the United States. The program also includes comprehensive retraining of managers and staff, a unique prototype design and a revamped franchising financing program so their new look can be adopted quickly.

New Look for the 50th Anniversary

According to Arby’s Chief Executive Paul Brown, the remodeling program was designed to help the brand’s new campaign and positioning, which will be done this year to coincide with their 50th anniversary. According to Brown, the goal now is to attain “deli-inspired deliciousness”, something that hasn’t been done with other fast and casual food chains. The brand, Brown says, is drawing inspiration from deli, with “lots of meat” for the sandwiches and plenty of variety that you can’t make at home.

Brown also said the company’s goal is to span the classification between QSR and casual with their new prototype décor. The changes are not just physical though, as it is also reflected in the menu with premium limited offers such as the Smokehouse Brisket sandwich, though their value offerings are still available. Brown says that the prototype economics is similar to QSR, but the design will have guests feel as if they’re still in a lively fast casual restaurant. And from the looks of it, the remodeling is a success, as there is a reported 20% increase in all the remodeled locations.

It should be noted that the changes are not only in the interior but the exterior as well, as there are now cantilevered red awnings at the entryway and the drive-thru, upgraded landscaping and lighting and white bricks. In addition, visitors to the newly remodeled restaurants will notice the new wood tones and illuminated signage. Once you step in you’ll see their new color palette, modern lighting and chalkboard graphics. In addition, the interiors have been spruced up with stainless steel and subway tilling and numerous multicolored wood designs. 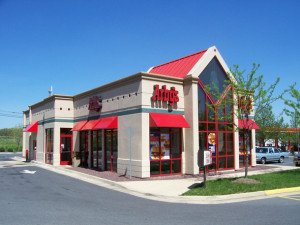 According to George Condos, Arby’s chief operating officer in Atlanta, the revamp is a “natural progression” following operation initiatives, marketing and menu developments that led to a 5% unit profit improvement from 2011 to 2014. According to Condos, “ramping up development” and remodeling was only a natural outcome after the economics was improved.

As of early July, Arby’s had finished remodeling 14 units from the 950 units that the company owns, and the plan is to complete several more this year. According to a company spokesperson, the goal is that in 2015 about 70 to 100 company owned locations will be “reimaged”, and that around 100 franchise units will also be redesigned so it conforms to the company’s new look. To accelerate development, the company released architectural plans to their franchisees, which currently run 2,400 of Arby’s 3,400 locations around the world.

Arby’s has joined forces with a leading financial lending institution so that a capital franchisee will have the means to remodel their unit. According to Condos, the financing program can shoulder costs up to 100% if the franchisee has a good record and meets the brand’s performance standards. Condos says that with this financial lending program, they will “eliminate the barrier” to affording it.

His statements were seconded by Brown, saying the program was designed so that most if not all their franchisees can afford it. According to Brown, the support and backing they are receiving from the Roark Capital Group in Atlanta, which bought Arby’s in 2011, made the remodeling project possible. As Brown noted, what they’re doing now “requires investment and patience”, but that they have shareholders and partners who can help them implement this strategy.

Aside from remodeling, Arby’s is also undertaking a comprehensive retraining of their staff, including managers and frontline employees. According to Brown and Condos, all staff members are being given training to ensure they’re aware of the company’s vision for their customers, now and for the coming years. Since the remodeling project began, more than 20,000 team members from Arby’s company owned locations have been trained, and many more are scheduled to follow.

According to Brown, the company is approaching the situation differently from others, as they’re not just focusing on the physical remodeling of buildings but also want to “reboot the system”. According to Brown, their “brand camp” is an “investment” but based on the 20% sales increase in the remodeled units, it is already paying off.

Overall, Arby’s is doing very well, with a 2.8% sales increase in fiscal 2013 which was better than the entire industry that year, and according to Brown, their performance in 2014 is even better. Aside from remodeling the restaurants, Arby’s is also going to start a new marketing campaign and offer more items on their menu in an attempt to attract even more customers.